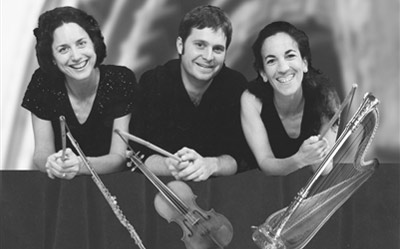 “The Debussy Trio has earned its reputation as a top-most chamber group, not only through the strength of its players, but through its polished yet daring programming.”
— Harp Column, May/June 2002

World premiere of "Spring Scape" by Bruce Babcock--winner of the 2007 Debussy Trio International Composition Competition. It was just recorded by the Trio as part of its 20th Anniversary recordings. Also, on program is the Trio's signature work, the Debussy Trio.

This Trio has excited international concert audiences at appearances in major European cities, at festivals, and on nationwide tours in the USA. Their CD Three Friends was a “best pick” for 2001 by Gramophone Magazine of London. Through the efforts of the Debussy Trio ensemble, the harp has gracefully taken its place as a recognized and valued chamber music instrument.